Earlier this week, my friend Adam Avitable hateshared an article on Facebook called “15 Thoughts Every Guy Has When Dating A Bigger Woman”, published on a platform called TheRichest (really? no y’all not.)

As you can imagine, people of all genders and sizes saw the title, clicked the bait, and got heated (myself included.) If I make it to 100 years old, the secret to longevity that I’ll share with the world in my Times article will surely be, “I made it a point to get mad about something on the internet every single day.”

In the midst of my #FeministRage, I knew this toilet-clogging wordlog needed to be expertly torn apart, and who better to do it than I, a not-size-0 person who has been striving toward unattainable weight loss goals for almost 10 years? #TheHeroGothamNeeds

The piece is now mysteriously gone from TheRichest’s absolutely-not-rich-at-all website, presumably because the lone female employee got a look at it, murdered the author (a man named Jim Hogue, with whom no one should ever engage in sexual intercourse), and threatened a sexual harassment lawsuit if it wasn’t immediately scrubbed from existence. But thanks to the magic of Google Cache, I can still drown in a maelstrom of hate over something that technically no longer exists. Thanks, The Internet!

Without further ado, here are some screencaps from The Worst Thing I’ve Seen This Month, Which Is Saying Something Considering The Month Ends Tomorrow: “15 Thoughts Every Guy Has When Dating A Bigger Woman” by Jim Hogue, who apparently cannot count higher than the number 15 (probably because that is his secret age)(and with whom no one should ever engage in sexual intercourse)(especially if he is, as I suspect, a minor).

Let me begin by saying: Jim, are you sure we can’t convince you to write poetry?

Picture it scribbled on a napkin in your freshman dining hall and left on a table for two:

Anyway, let’s get to the underlying issue, which is this: when Jim sees a man walking happily with a woman whose thighs have a greater circumference than his dick, he feels sorry for the dude. Is it really because fatties are gross, or because of the crushing loneliness in which his shitass worldview has prompted him to exist? WHY WILL NO ONE HOLD JIM’S HAND?

Ashley Graham, JESUS, could you PLEASE stop blowing up Jim Hogue’s phone. How many times does he have to tell you? Unlike these other desperate CHUBBY CHASERS, Jim is just not willing to prioritize “happiness over appearance”, and he will not take your call even when he is done sending pleading, comma-less emails to Kate Moss. #ThirstyForJim 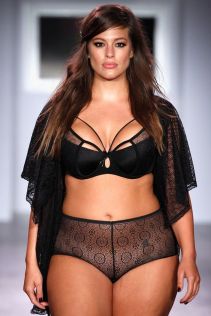 “Some guys. HAHA, NOT ME THO! Definitely not me! I get so much… *discreetly looks at word written on palm* …vageema! HA! Bitches, amirite????? *chokes back sob*”

Last month, I was roadtripping home from a wedding and stopped in a mid-Florida McDonald’s for some hangover nuggets. While I was waiting for my order, an older gentleman sat down at my booth with me, complimented my hair/nail polish/toenail polish, and launched into a 5-minute story about his recent career change/health problems/grandchild (whom he loves very much). IT’S BECAUSE I SKIPPED THE GYM LAST WEEK, ISN’T IT?

a) Fact:”Overweight women should hire themselves out as professional cuddlers” is the sentence most likely to be found in the secret diary of a serial killer!
b) It’s likely that Jim Hogue tries to sit next to bigger women on the subway so he can take a gentle nap on their breasts. They “are always willing!” The police report and brief probationary period were just one big misunderstanding!
c) …is your brother ok 😦 why so much snuggling 😦 can somebody check on him 😦

It’s not til 11 long-winded, brutally oblivious entries later that we get a look at what the fuck is actually Jim’s problem.

“6. There Is Less Pressure On How You Look”

Jim-ese to Basic English translation: “Bro, you remember when I was dating that bitch Jessica who always complained about the dumbest shit? Like, ‘Take a shower, Jim, it’s been 3 weeks’ and ‘You’ve been wearing those sweatpants since Christmas morning and they’re falling apart’ and ‘Maybe we could have dinner together sometime this month instead of you going to Burger King and eating by yourself at 10pm?’? Man, I don’t know what her problem was. Must’ve been that she was a size 2. Never stick your dick in crazy, amirite???”

Basic English to Intuitive English Translation: “I am so alone. Do you wanna snuggle, man? My 12-year-old brother is at school.”

Jim, if I’m reading you correctly, several women of varying sizes have probably told you to fuck right off in your lifetime, and while you probably deserved it, I’m sorry if it made you sad. Regardless, there’s no need take your hurt feefees and turn them into a 15-item thinkpiece, generalizing one of your shittiest opinions to every living, bepenised human being.

I realize this is hypocritical coming from a person who just wrote an angry 1,000 word response to a shitty 2,500 word thinkpiece, when instead, this post could have consisted of a single screencap: 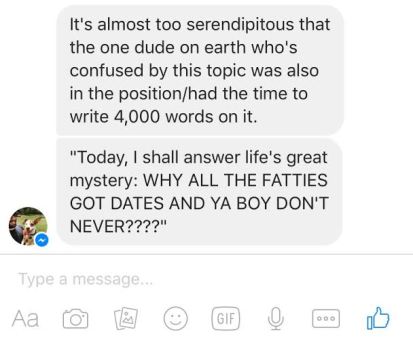 Would I lie and say I’ve never eaten an entire pizza by myself? Nah.

Do I, or any other women, care what the fuck Jim Hogue thinks?