After something like TEN WEEKS, we have almost made it to the end. We see a light and, though we know it is a train, we are still grateful. It’s Part 1 of the 2-part season finale, and it’s picking right back up after Luke unceremonious Second Dumping at the rose ceremony!

We need to talk about the styling for this episode real quick. Inspiration: the genie that would come whooshing out of the the bottle if you rubbed it the wrong way. She’s still in the yoga-top-hitched-to-maxi-skirt dress, and her hair is in a floppy, weird bun with too-long pieces curling down around her face. She’s wearing glittery, heart-shaped hoop earrings (see header). A NIGHTMARE! 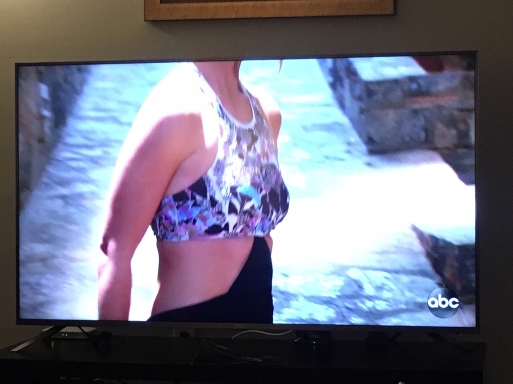 Okay, moving on. Bad Genie says: “I have three amazing men standing in front of me.” 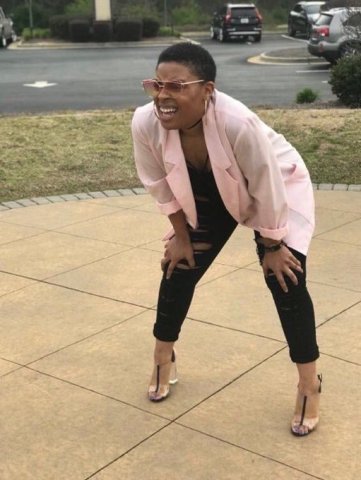 She says that this is going to be really tough and she will be breaking her own heart as well, by saying goodbye to someone tonight. She gives the first rose to Megamind Jed and the second to Tyler, which means Pilot Pete is no mas.

Hannah seems Genuinely sad and is crying real tears when she walks him out. “Everything has been perfect and easy and you’re the dream guy I’ve always wanted.” Also, they’re both like, “we had an AMAZING night together” so I feel like shit was absolutely POPPIN’ in the windmill! AYYYY!

Peter says he doesn’t regret anything and she will always have a piece of his heart. He cries by the limo and they share a very sweet goodbye. Peter was not my type, but he was a VERY good and decent dude, and I wish him the best.

LIVE AT THE STUDIO

Ah! Well! Peter is here, watching all of this for the first time in front of a live studio audience! He’s clearly having a hard time with it, and his family is there, also crying a lot. Hannah comes out to see Peter for the first time since their breakup, and tells him that if there was anything wrong at all between them, it was that he didn’t express his feelings enough… verbally… because things were certainly “passionate” (*insert “oOOoOOoOOoO!!!”s from the whole audience as they blush*).

When Hannah says “I was scared I was letting go of the perfect guy”, someone from the audience yells: “you did!!!”

Hannah also clarifies that she “lied” about their time together in the fantasy suite: while previously she said they “did something” twice, but it was actually… four times!

Listen Hannah, you are truly a good sport because Peter’s DMs are going to be LIT LIKE A LAMP for literally months to come. If he can’t have you (which is yet to be confirmed) he can sure have someone! Also, sorry, but it’s weird how much Peter’s parents are APPLAUDING this information. I know we’re all adults here but that was b e y o n d!

And just like that, we’re back in Greece and Tyler is meeting Hannah’s family first. She tells her parents that she wasn’t sure if she was falling in love or in lust with him, so holding back at the fantasy suite was a good move because it helped her decide.

Mom immediately loves him, which I feel like probably happens to Tyler a lot. Dad asks him about the fantasy suite thing, and he says: “I wanted her to feel loved and respected and the night was all about us just talking and connecting—there’s a time and place for everything”. He also says that he really loves her and wants her to be the mother of his kids and knows she would do an amazing job “leading the household with her faith”.

Spoiler alert: This was the worst meet-the-parents since Jojo’s roid-raging brothers almost ran Ben out of the house (remember that??) While Tyler automatically had the advantage, because there’s nothing Traditional Parents love as much as when you don’t fuck their daughter, they were anti-Jed from the get—AS THEY SHOULD BE.

The entire visit is flat. Dad asks Jed how he plans to support himself and Hannah with his music career, and here is when I learned that my horrible reflex of being embarrassed for someone else is even activated when I hate the other person: Jed tells Dad that actually, he just signed a contract with… a dog food company… to write their jingles. 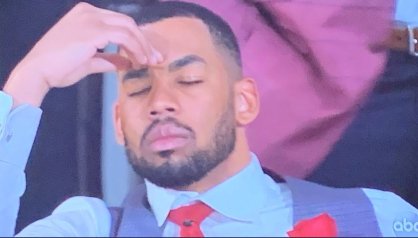 Mom is similarly thrilled when she asks Jed about himself:

“I’m a musician and a songwriter.” MOM’S FACE THO. #TheBachelorette pic.twitter.com/WkQOdKtAuS

Near the end of the visit, Mom cries, saying “I want someone who will love you like I know you should be loved.” Promising!

Hannah asks Dad how he liked Jed, and he says: “Well, he beat around the bush a little bit but I think that’s just part of his personality. He stretches things out and doesn’t give direct answers.”

Back with Hannah, Jed is thinking, “My god, all I wanted was some #sponsored content on Instagram and now there’s a 50% chance this girl wants to marry me?? FUCK!!” but what he says is, “Why does your family only care if I can provide for you??” Which, listen, I agree that the man being “the provider” is a dated and kind of offensive concept, but I also don’t think that wanting financial stability for your kids is a bad thing.

Hannah, perhaps a LITTLE more in tune with red flags after dispatching Luke, is unsettled by her parents’ obvious distrust of Jed. They talk down by the water and she’s like, “what if I pick the wrong guy??” and Jed’s like, “Don’t listen to anyone else; WE know what we have!” Oh good! Isolating her from the opinions of the people who love her, because they realize you’re a fraud and a douchebag! Very good.

The producers have, of course, put Tyler back on a horse because he doesn’t like horses. Y’all are assholes, you know that, right? However: he’s adorable and perfect and I love it. Tyler pays his horse’s neck, saying “I’m building our bond right now” as the horse turns and wanders away from him.

The rest of their date is typical Tyler fare: he is perfect and such a gentleman; she talks about how she knows he would take care of her, keep her safe, and how they would have the cutest little babies. DINGDINGDING! THAT’S CORRECT! KEEP HIM FOREVER!! There are only four men in the world who are this good on the inside, and the outside does not look like that. Issa catch.

They’re on a boat, and also on a metaphor for their relationship. Hannah notes: “Is this really rocky or it is just me?”

Soon, Hannah gets really nauseous. She blames it on the rough seas, but really it’s because deep down she knows that her parents hate Jed, and possibly also in part because he is wearing khaki cargo shorts, a leather belt, and no shirt. Love too go on the boat! Very normal boating outfit, right here!

Even after they get off the boat and are sitting by the water, Hannah seems extremely unsettled. LISTEN TO THAT FEELING, BABE! You deserve better than this. You deserve TYLER.

Alright, that’s all for now. I’ll be back tomorrow to drink my feelings, either because Hannah is engaged to Tyler so I can’t be, or because she picked the wrong dude and is now probably engaged to no one because Jed is garbage. XOXO see y’all sooner than usual! 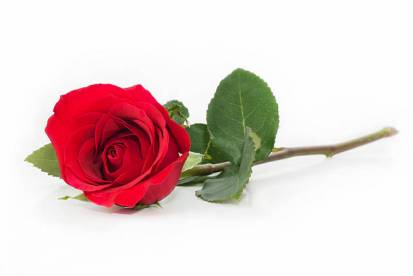