Well, folks… here we are. After 10 weeks of suffering, we have finally arrived at Night One of the LIVE Two-Night Four Hour Finale of Colton “Permavirgin” Underwood’s season. It begins with a montage of all the various women telling Colton to be careful, because some of the women in the house Are Not Ready to be engaged after 11 weeks.

Predictably, we’re forced to revisit a bunch of footage from last week’s breakup with Cassie, as well as his relationships with the top few candidates over the season. I’d like to note that I did not believe that Colton was a virgin until I saw him interact with a woman for the first time, but after that, I believed (and still do believe) it 100%.

(Can I just say that I’m so mad at the show for doing this to me?? I have GOOD TV that I could be watching for four hours this week, instead of FOUR LIVE HOURS OF THE BACHELOR FINALE, which apparently is the new status quo for the franchise and will happen every goddamn season.)

Anyway, back to the disaster at hand. The only hint that Colton was (is?? who knows) some type of athlete, is how quickly he was GONE after he hopped that fence. By the time Chris figured out the gate remote, ya boy was OUTTA THERE. The crew and Chris drive around aimlessly and finally find him walking in the street. He completely ignores everyone with a thousand-yard stare.

Colton cries some more and says that, for his whole life, he’s had to deal with “not being enough”, which is admittedly a very sad way to feel. Chris Harrison asks helpfully: “Which part of tonight makes you feel like you’re not enough?” Um—may I hazard a guess at THE WHOLE THING?

The next morning, Chris and Colton are discussing what happened with Cassie. Colton thinks she is “scared”; Chris asks: “What if the bottom line is she’s just not that in to you?”

… to which Colton responds: “I think I have a pretty good gut instinct about that. And… she loves me.”

Cut to Colton, in a van on the way to somewhere, telling us that he wants to be with Cassie and knows what he needs to do, which sounds… ominous. Of course, he pops out the van at poor Tayshia’s Airbnb, where she welcomes him with a glowing smile. 😦

COLTON DOES THE DUMPING, PART 1:

It quickly becomes clear that this conversation is not what Tayshia was expecting. She looks… not happy, but not devastated, but then asks if they can talk inside without all the cameras, and Colton agrees. Last night a friend pointed out to me that THIS WAS FOR COLTON’S BENEFIT, BECAUSE HE WAS ABOUT TO START CRYING AGAIN, AND SHE WANTED TO HELP HIM SAVE FACE!! Women literally never stop doing emotional work for men EVEN WHILE THEY’RE LITERALLY BREAKING UP WITH US!!!! It’s time to throw men in the garbage.

Back in real time, Tayshia is brought out on the live show. She is stunning, as always, and her conversation with Colton is polite and standard. BABY GIRL, YOU DESERVE BETTER THAN THIS POTATO MAN AND I HOPE YOU’VE ALREADY FOUND IT!!

COLTON DOES THE DUMPING, PART 2: THE TRAGEDY OF HANNAH G.

When Colton shows up at Hannah G.’s Airbnb, she is journaling. She tells the camera: “iiiiiii love Colton! iiii love him!!!” with some bashful hand motions for good measure.

Colton also tells her: “You still remind me of home.”
So… you love home less than everywhere else? You dislike home? You would pick a teenager who doesn’t even like you and was only here for Instagram followers, over HOME???

There’s a lot of crying; Colton says “I’m doing my best” [Ed note: He is not!]; HG definitely thought it was going to be her—and who could blame her???—and she is both sad and pissed off.

Outside, still crying, Colton says: “I don’t know if I’m giving up a sure thing for something that is impossible.” That’s a good way to pick someone to spend the entire rest of your life with: by who is a “sure thing”!

Back at the Four Hour Live Season Finale (Part 1), Hannah G. comes out on stage looking extremely beautiful (surprise!) They go through the normal stuff, how are you, how did you feel watching that, etc. etc. etc.

Chris again brings out our Large Son, who has unfortunately adopted the signature haircut of men’s rights activists everywhere: 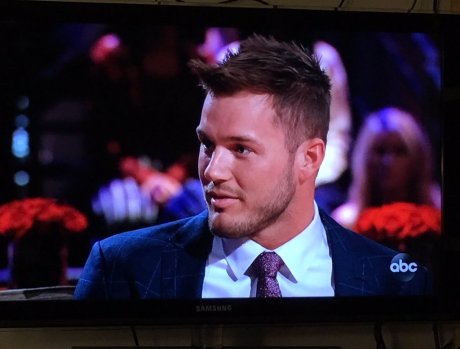 HG gets a few minutes to take him to task for, essentially, leading her on for THE ENTIRE SEASON, and then yanking the proverbial carrot away at the last minute. She still seems pretty pissed off, and again, who could blame her at all. I wish the best for America’s enchanted Skipper doll, and hope she is happily with someone who isn’t a dipshit.

CASSIE: YOU’RE STILL IN THE RUNNING TOWARD BECOMING AMERICA’S NEXT TOP VIRGINITY-TAKER

Back at her own Airbnb, Cassie—who is frantically throwing her shit into suitcases as though she knows Colton is about to show up and try to convince her to Marriage Him— tells the camera: “ I can’t wait to be home with my friends and put this all behind me!!!”

Colton: “I just want to be with Cassie. I want to be loved back the way I love someone.”

YOU COULD HAVE BEEN, IF YOU PICKED SOMEONE WHO GAVE A SHIT ABOUT YOU! So… LITERALLY ANYONE ELSE? Deep sigh. I can’t help men anymore, I honestly can’t.

Colton gets back in the van to go—I WONDER WHERE? Just kidding, he’s obviously going to Cassie’s Airbnb to try and convince her to love him, which always works well and has never ended in a hostage situation!

Did all that “NFL training” make him quick enough to catch her before she escaped?? Find out… TONIGHT ON THE BACHELOR!