Hello friends, and welcome to Part 2 of Colton’s Season Finale, which begins with Chris Harrison dramatically asking… “Will Colton win Cassie back, or be a virgin forever?” Because those are definitely the only two options!

As predicted, Colton shows up at Cassie’s hotel and asks her to come outside to talk. She’s wearing great boyfriend jeans and GREAT cheetah mules that I will be purchasing at my earliest paycheck. Here’s where everything gets real fucked.

Colton tells the camera: “I hope she’s not at peace with her decision, because I’m not.”

My dude, just because someone doesn’t feel the same way as you, doesn’t mean they are wrong/not allowed to feel that way/need to change their mind??? He proudly announces to Cassie that he has dumped Hannah and Tayshia. Read: “LOOK! YOU ARE THE ONLY ONE! NOW YOU HAVE TO TAKE ME BACK!!! BECAUSE WITHOUT YOU, I HAVE NOTHING!!!!”

Cassie sits there, making the following face while repeating various combinations of “…Wow! This is crazy!! I’m so confused! I can’t believe you did that!!!” for five entire minutes:

She’s thinking about changing her name and fleeing to a country with no extradition laws.

Here’s a life tip for all my readers, free of charge: if you confess your love for a woman, and her response includes ALL of the following phrases, which I wrote down verbatim from the episode:
-“I’m confused.”
-“I’m SO confused.”
-“I don’t know what’s going on.”
-“This is so weird.”
-“This is not normal.”

…do you have a girlfriend, or a dazed hostage who is carefully trying to escape but also doesn’t want to upset you because you’re holding a knife?

Colton then asks Cassie to accompany him to Spain and meet his entire family, who are… already in Spain, waiting for him to show up with at least one Potential Wife.

They head back inside, with Cassie still repeating “I AM CONFUSED! I DON’T KNOW WHAT’S HAPPENING! THIS IS CRAZY!” I want to hug her. This is not okay. YOU CAN GO HOME IF YOU WANT TO! BLINK TWICE IF YOU NEED A HELICOPTER!

In Spain, Cassie still looks like she is permanently on the verge of throwing up. She is wearing a black dress that would be perfect for a funeral, and her nail polish is chipped. The whole family interaction is horrendous, with everyone questioning why she is here when she previously decided to “bail”. Let me make it easy for you: She is here because the show would literally not let her leave? She offered every kind excuse in the book, and Colton was so pushy and hardheaded that he either didn’t realize, or chose to ignore that SHE DOESN’T LIKE HIM, and she finally just gave up. The producers can honestly eat me for encouraging this manipulative bullshit.

If every other thing that happened up to this point wasn’t enough of a clue, Cassie shows up to their day date WEARING LITERAL SWEATPANTS. IT IS DAYTIME. DAYTIME SWEATPANTS. They unenthusiastically rappel down a small cliff to a picnic basket to have another Horribly Revealing Conversation. Cassie has clearly spent her evening coming up with more excuses to try and break up with Colton, including “It’s not being in a relationship with YOU, it’s being in ANY relationship!”

At dinner, Cassie (still looking green) accepts Colton’s invitation to the fantasy suite. OF COURSE! Because the most important issue facing this country is THE VIRGINITY STATUS OF COLTON’S DINGDONG, they make a huge show of kicking the camera crew out of the room and putting up the “Do Not Disturb” sign, which in Spanish reads “No Molestar”. No molestar, indeed.

The next morning, the cameras make a big deal of zooming in on a few items of clothing on the floor, including Cassie’s heels. Whoa! She took her SHOES off?? This MUST have been a super crazy night!!!!! Colton tells the camera, with the biggest white-boy smirk that’s ever existed, “… We did what was best for our relationship.”

At this point I must apologize, because I got a dog-rescue related text and was unable to take notes for most of the rest of the episode. Some things are more important than Colton’s dong! Also, everything else that happened basically sucked! Four hours of finale is too many hours!

-At the live show, Cassie is wearing the worst white jumpsuit with an ugly-ass neckline and LOVE HANDLE CUTOUTS!!!! Y’all know how I feel about cutouts. This shit makes me want to bleach mine eyes. 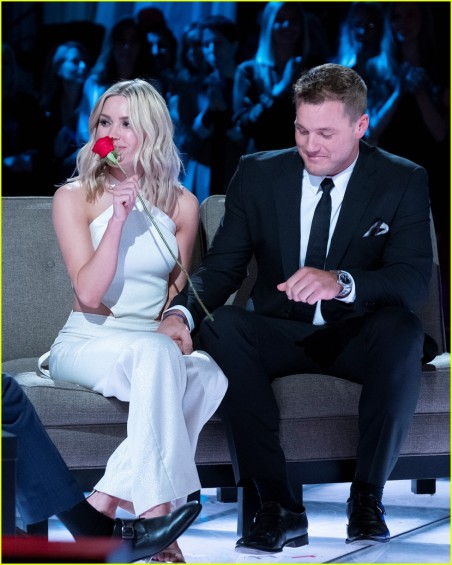 -Speakig of eyes: Cassie’s are completely dead! How many months did she promise Chris Harrison she would pretend to be in love for the sake of Ratings? Maybe like… 3, starting yesterday? Love too hold myself emotionally hostage for the possibility of a Fit Tea sponsorship!

Ah, that look of love.

And now, the moment we’ve all been waiting for… the announcement of the new Bachelorette. Could it be darling Tayshia? Could it be oh-so-wronged Hannah G.? Could it be sweet Caelynn?

Of course not. It is Alabama Hannah B., who, God bless her, could not successfully hold one conversation with one man, and is now being asked to entertain THIRTY MEN AT THE SAME TIME! I know I said this about Colton’s season but—HOW AM I GOING TO WATCH THIS????

I first muted, then completely turned off the TV when they brought out HB’s first five suitors. She was more awkward than Becca!! HOW IS THAT POSSIBLE???

Friends, this season has really been… something. We here at Carly’s Into That deeply appreciate your readership and support, without which none of this *waves vaguely to air in front of face* would be possible. Now buckle up and start training your livers for next season, because…